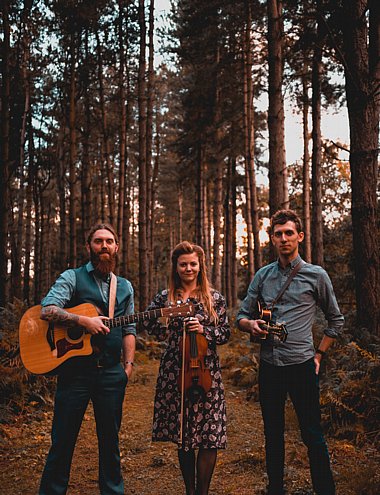 And they're back!  After a hugely successful gig in the Old Brewery in 2019, we welcome The Shackleton Trio  - Georgia Shackleton (fiddle, vocals), Aaren Bennett (guitar) and Nic Zuppardi (mandolin, banjo) - back to Cromarty, this time to play the bigger Stables venue.

Natural talents of the folk tradition, their self-penned material blends seamlessly with their imaginative yet authentic re-workings of traditional folk standards, influenced by British, American and Scandinavian folk traditions, with a regional twist from the group's native East Anglia.

With a highly original and energetic musical style, the trio has been a tour de force on the UK and international folk scene over the last six years. They have been featured on Mark Radcliffe's BBC Radio 2 Folk Show and BBC Radio 4, with five star reviews, and an appearance on Cambridge Folk Festival's main stage alongside a host of UK and European festivals and international tours.

★★★★★ ‘Beguiling. Holds your attention and isn’t afraid to make you think’
- Northern Sky
‘Sparky, charismatic and intensely assured’ - fRoots
★★★★ - R2 Magazine
‘A voice entirely of their own’ - Mike Harding

Tickets:  £12 / £8 student/unwaged
Purchase in advance by emailing info@cromartyartstrust.org.uk or tel 01381 600354. May be sales at the door if availability allows.

We do not send out hard tickets but will have a record of your purchase to tick off on the door list.