Chris spent almost one month's residency in Cromarty during August 2021, together with his wife Dawn, an academic and writer.

I decided to use the time to try to connect drawing with painting in a way I haven’t really done before, that is to say, making drawings, or sketches (the semantic difference between I’m still working out!) and then making paintings from them, without recourse to anything else, but memory. So I spent a lot of time going out to look and draw and used the slightly less good weather days to visit the stables and make some study paintings. One of the days I timed the tides and tried to get to the Sutor Stacks and managed to get as far as Charlie’s Seat, before realising that the next stretch was a bit of a rock climb. I was close enough to make a couple of drawings though. Some of the locals told me it used to be possible to access them from the cliff top, but now the track down is eroded and dangerous. 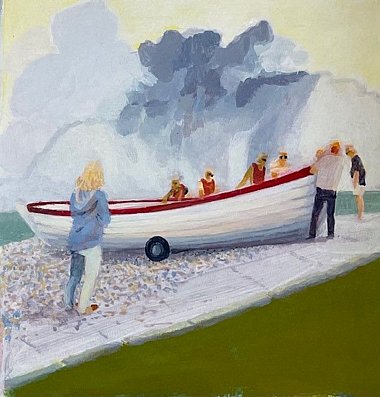 My small studies are ‘cameos’ in the sense of being ‘moments’ recorded, or represented in a succinct way. They are also a gathering of motifs and the more I looked, the more I saw. Becoming familiar with a place seems to be as much about synchronising with its rhythms as it is about getting the eye in. Cromarty has so many facets; on the last day before we left I discovered the Gaelic church ruins up behind the library for the first time, for example. The upturned cable reels at Slaughterhouse Café are very Paul Nash and watching the rowers going out each day – and on one occasion racing a cruise liner up the firth – are significant moments in the memory. If I lived there I would definitely wish to join in with the rowing!

I have written a couple of posts about my reflections on making art at Ardyne at https://relphster.info/  and which I’ll no doubt add more to in the coming weeks, as I unpack my memory.  I think I’ll make some more finished and larger scale paintings from the Cromarty studies and so would very much like to stay in touch and, it goes without saying, we would love to return at some point in the near future.