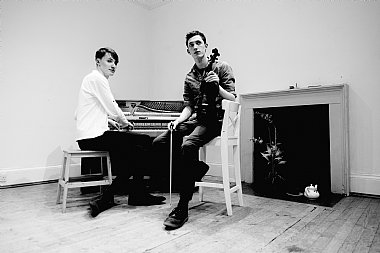 Charlie Grey and Joseph Peach make music on the piano and fiddle. They are Scottish folk musicians, interested in making music filled with spontaneity, sensitivity and freedom. Their performance will feature a screening of Air Iomall - a film and suite of new music, inspired by now uninhabited islands deep in the North Atlantic - some of Scotland’s most remote, and remarkable places.

Travelling aboard the Dutch tall ship Wylde Swan, the duo visited and wrote music inspired by the histories, people, and landscapes of these mysterious, wild places, including: The Shiant Isles, North Rona, The Flannan Isles, Sula Sgeir and St Kilda. Hamish Macleod’s film documents the duo on this once in a lifetime experience, providing a visually stunning, sensitive insight in to these under-documented and enigmatic landscapes. It culminates with a concert of their new music on St Kilda - the most remote part of the UK, on the 88th anniversary of the evacuation of its native population.