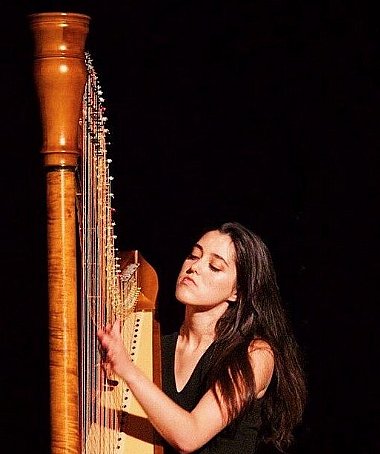 Abigail Millar Todd is harpist who studies in Oslo under Isabelle Perrin. After beginning clarsach through feis à bhaile and then feis rois, she became increasingly interested in the possibilities that the classical harp offers. Thanks to the Highland Council providing a harp, Abigail began to play this type of harp along with classical music in 2012, and after a few months she had started attending Aberdeen City Music School. She has since been to Douglas Academy in Glasgow and Chetham's School of Music in Manchester.

Abigail became a member of the NYOS symphony orchestra at 13, and has since regularly played in a variety of their ensembles as well as other orchestras. As she is very passionate about orchestral music, she worked with the Bergen Philharmonic at 17. She loves to play chamber music and has worked a lot with violinists, flautists, singers and pianists for concerts in various locations such as the Cowdray Hall in Aberdeen, Stevenson Hall in Glasgow, Aberdeen Music Hall and the Carole Nash hall in Manchester.

Abigail is in the first year of her Bachelor in Music Performance, and studies at Norges Musikkhøgskole.

Programme to be confirmed.  Performance will last approx an hour with short interval.

Tickets:  £10   SCHOOL CHILDREN GO FREE!
Tea & coffee available to purchase or bring your own refreshments
To reserve: email or tel 01381 600354 or can purchase on the door