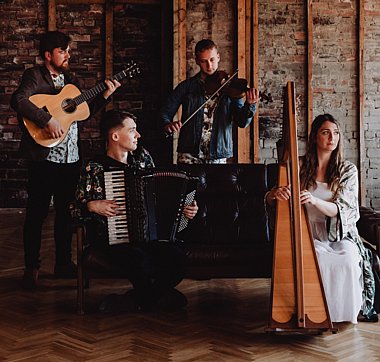 Bold, creative, and original; Tannara (Owen Sinclair, Robbie Greig, Becca Skeoch and Joseph Peach) have established themselves as one of the UK’s most interesting and unique contemporary folk groups.

Formed in 2014, the band came about as a natural extension of the four members’ love of making music together. Fuelled by this, they’ve covered considerable musical ground over the past five years. With a background in Scotland’s native traditions, their ceaseless musical development is a melting pot of ideas, genres and sounds, from indie rock to electronica, as well as Scotland’s vibrant and diverse folk scene.

Unafraid to experiment, their music is an electrifying meeting place for a world of sounds; punchy and clean, riotous and gritty, tender and honest. On fiddle, harp, guitar, accordion and vocals, Tannara make an intensely considered musical world which is uniquely theirs.

Their debut album “Trig” was released in 2016. Produced by Rachel Newton, their first offering as a band was a raw, joyous, reflection of a band finding its sound. It was received to great acclaim, from critics and audiences alike. Described by Living Tradition Magazine as “Simply Outstanding”, it was longlisted for “Album of the Year” at the 2016 Scots Trad Music Awards, the same year in which the band were nominated for “Up and Coming Artist of the Year”.

From open air festivals, to intimate housconcerts, and everything in between, the band love playing live. A fact that’s reflected by their so far busy schedule of performances and radio appearances across Europe, with highlights including Cambridge Folk Festival, and Festival Interceltique de Lorient, a performance described as “Fiery and Graceful” by The Herald. The band released their second album “Strands” at Celtic Connections Festival 2019. The album represents a significant development for the band, who’ve spent the past two years writing and recording it. 'Strands' was produced by guitarist Owen Sinclair and accordionist Joseph Peach, with input and guidance from Lau’s Martin Green. They’ve created a whole world around the band’s music; of found sounds and samples, synthesisers, and guest performances from Mattie Foulds on percussion and Josie Duncan on backing vocals.