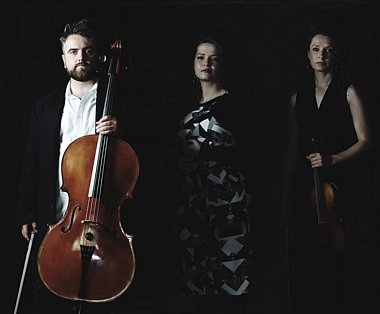 The Kapten Trio has developed a reputation for its innovative programming and spirited performances across the UK. Join us for an afternoon of uplifting piano trio music, featuring favourites by Debussy and Brahms, alongside two brand new works commissioned by Chamber Music Scotland for the Kapten Trio by Scotland-based composers Emily Doolittle and Shiori Usui.

EMS Residency Ensemble from 2017-2019, the Kapten Trio is made up of three outstanding graduates of the Royal Conservatoire of Scotland. The trio formed in 2011 whilst students at the Royal Conservatoire of Scotland, where they were chosen as Young Artists in Residence, and have since gone on to develop a reputation as one of the top piano trios in the country, known for their passionate performances across the UK and further afield.

Kristi Kapten is a prize-winning Estonian pianist. She received her Bachelor's Degree in 2010 from the Estonian Academy of Music and Theatre (EAMT), before attending the RCS, studying with Fali Pavri, receiving prizes in several prestigious competitions and graduating with Distinction. In 2011, Kristi won 1st prize in the II Tallinn International Piano Competition. In 2017 she obtained a doctorate at the EAMT.

Violinist Rachel Spencer enjoys a wide-ranging freelance career as a soloist and chamber musician. Originally from Holmfirth in West Yorkshire, she studied at the Royal Conservatoire of Scotland with Peter Lissauer and James Clark, and subsequently at the Guildhall School of Music and Drama with Alexander Janiczek, graduating with Distinction and a diploma for outstanding performance. As a chamber musician Rachel has appeared with groups including the Assembly Project, Ensemble Perpetuo, as a guest with the Maxwell and Edinburgh Quartets and with artists including Benjamin Grosvenor, Charles Mutter, David Watkin and Alasdair Beatson. Passionate about music education, Rachel has been an artist for outreach scheme Live Music Now since 2011, a position which has seen her lead music education projects across the UK, Denmark and the Middle East.

Cellist Duncan Strachan was brought up in the west highlands of Scotland and read music at St Catherine's College, Oxford where he graduated with a Double First Class Honours. He then went on to study for a Masters degree at the Royal Conservatoire of Scotland with Robert Irvine. Duncan is cellist in the Maxwell Quartet, and artistic director at the Loch Shiel Spring Festival.