Described by MOJO as 'a mouthwatering collaboration', Alasdair Roberts, Emily Portman, Lucy Farrell and Rachel Newton are four fine soloists sharing a mutual love of traditional songs, from both sides of the English and Scottish borders, with playful, boundary-defying musicianship.  Since their critically acclaimed debut At Our Next Meeting, The Furrow Collective has been in demand as a touring band, gigging throughout Europe and performing BBC live sessions. Hot on the heels of two BBC Folk Award nominations, they have released an outstanding five track EP Blow out the Moon last autumn, coinciding with touring, offering a tempting taster of their next album.

Each band member leads a song, moving with ease from jaunty stories of ailing horses, to poignant laments and sparsely adorned supernatural ballads. Blow Out the Moon culminates with the beautiful title track, a lullaby in spine-tingling four-part harmony. Strikingly unaffected vocals are accompanied by harp, guitar, viola, concertina, piano, banjo, fiddles and musical saw. Blow Out the Moon reflects the breadth of the Furrow Collective’s diversity whilst showing a crystallisation of their unique sound. 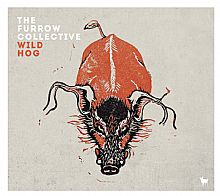 ‘The Furrow Collective have an air of immeasurable antiquity, while at the same time making the songs vibrantly new’. R2