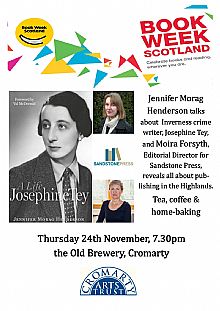 Plus Moira Forsyth, Editorial Director for Sandstone Press, will talk about publishing in the Highlands.

At the Old Brewery, Cromarty on Thursday, 24th November at 7.30pm.

Jennifer Morag Henderson has had articles, short stories and poems published in magazines and anthologies, including Riptide (Two Ravens Press), Northwords Now, The Dalhousie Review, Gutter, by the BBC and others. As a playwright her work has been performed for the National Theatre of Scotland’s Five Minute Theatre project, and elsewhere. She holds an MA in English Language and Sociology from the University of Glasgow, and a Graduate degree from Dalhousie University, Nova Scotia, Canada.