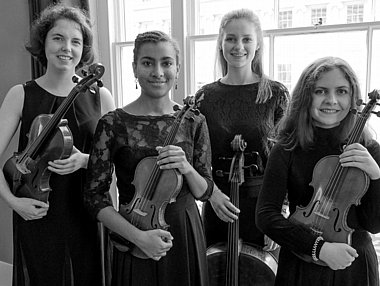 Seer Quartet was founded in early 2019 at the Royal Academy of Music in London. As current undergraduate students, they receive regular coaching from eminent chamber musicians including Martin Outram, Jim Sleigh, Jo Cole, and members of the Doric String Quartet. In their first year together, the quartet have performed across the UK, including at concert series in Norwich and London. They have a strong commitment to outreach work, and have recently been working in collaboration with Open Academy and Camden Music with primary schools in North London.

Emma Baird is a Scottish violinist studying at the Royal Academy of Music under Ying Xue from the Doric String Quartet. She started playing at the age of 4 with Christine Nelson and later studied with Professor Andrea Gajic at RCS Junior Conservatoire and St Mary’s Music School. Since beginning her undergraduate studies, Emma has taken part in numerous chamber music and orchestral projects. She is also an ambassador of the Benedetti Foundation.

Rachel Spence (hailing from Fortrose on the Black Isle) studies viola with Martin Outram at the Royal Academy of Music in London, where she holds the Sir Elton John Scholarship. She has appeared as a soloist at festivals including the London Strings Festival, and been principal viola of the Verbier Festival Junior Orchestra and the Berlin Opera Academy. She plays a Panormo/Milanese viola c.1790, on loan from the Royal Academy of Music.

Sophie Oliver ​is an undergraduate music scholar at The Royal Academy of Music. Prior to starting at The Academy, she was an active member of the Bromley Youth Music Trust, where she won the Rotary Trotman Final. A supporter of charity projects, she organised her own solo recital, raising nearly £2000 for Juvenile Diabetes Research Foundation. Sophie also extends her love of music beyond the cello, and she is now a student ambassador for English Chamber Orchestra.