5 of Ross-Shire’s most outstanding young traditional musicians are taking part in this innovative project throughout July and August.  The Ceilidh Trail provides young people aged 16 – 25 with the opportunity to learn about life as a professional touring artist.  The Fèis Rois Ceilidh Trail takes high quality traditional music to places where visitors will be in the peak summer months and is a successful cultural tourism initiative.  This summer the group are performing at venues from Madhatters to Poolewe Ceilidh Nights and from the Beinn Eighe Nature Reserve to Belladrum festival.

A great family night out!

Tickets cost £7 and £4 for children 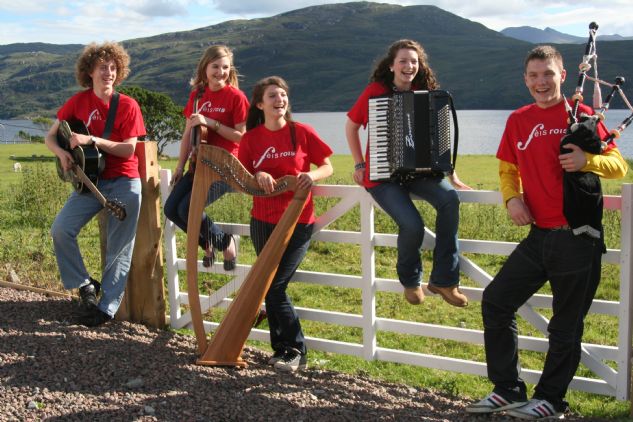 Katie MacDonald is a guitarist from the small west Highland village of Glenelg where at a young age she picked up a taste for traditional Scottish music. This sense of tradition was reinforced by a year spent studying traditional music on the Isle of Benbecula in the Outer Hebrides. During her time there she received tuition from some of Scotland's finest guitarists such as Tia Files, Matheu Watson and Ewan MacPherson. After successfully completing an apprenticeship in Community Arts Management, Katie now works full-time as a Project Co-ordinator for Fèis Rois. She has played at many prestigious venues and festivals including Celtic Connections, Blas Festival, The Royal Albert Hall, Edinburgh Festival Fringe and Belladrum Tartan Heart Festival.

Cameron Macdougall, aged eighteen, from Nigg in Ross-shire is fast making a name for himself as one of Scotland’s finest young pipers. He took up piping at the age of nine under the tutelage of double gold medallist Niall Matheson. Cameron performs regularly with local traditional music group, Gizzenbriggs, and with the Royal Burgh of Dornoch Pipe Band. Cameron has secured a place to study BA Piping at the Royal Conservatoire of Scotland from September 2015. In 2014, Cameron won the prestigious MacGregor Memorial Piobaireachd competition which has allowed him entry into the acclaimed Silver Medal competition at the Northern Meeting in Inverness in September 2015.  In addition to playing Highland bagpipes, Cameron also plays Scottish Border pipes, whistles and flute. He will take part in the Fèis Rois Ceilidh Trail for a second time in 2015.

From Inverness, Shannon Cowie is a talented singer and multi-instrumentalist who plays fiddle, pipes and whistles. Shannon went through Gaelic-medium education and is now a science undergraduate at the University of Glasgow. She is a Gaelic Ambassador at the University and is involved in promoting a number of Gaelic events in the city. Shannon has been involved with FÑis Rois for a number of years having attended residential usic courses in Ullapool. She performed with FÑis Rois at the Royal Albert Hall in London as part of the Schools Proms series.

From Aviemore, Jordan Neil has recently completed his high school education at Kingussie High School. He will take up a place studying BA Applied Music at the University of the Highlands and Islands in September 2015. Jordan is a superb young piper and guitarist. In addition to performing with the Ceilidh Trail, he will also be performing at Belladrum with his own band.

From Inverness, Robbie MacKenzie has just completed second year of the BA Scottish Music degree at the Royal Conservatoire of Scotland. He is an accomplished fiddle player who recently took part in a multimedia project LED BY Artistic Director, Duncan Chisholm and organised by FÑis Rois and supported by the Highland Youth Arts Hub. This is Robbie’s second year participating on the Ceilidh Trail. He is from a renowned musical family and often performs as a trio with his mother, Alison and his brother, Graham.