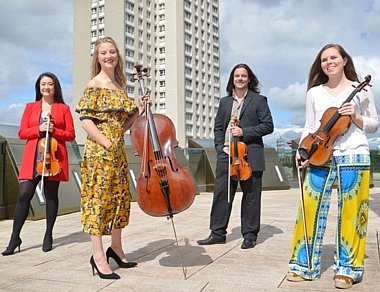 We welcome back The Brodick Quartet after a hugely popular recital last year. Formed in 2016 and comprised of four of Scotland's most promising young string players, this time the quartet bring us a programme of Shostakovich and Beethoven – the perfect way to spend a Sunday afternoon and kick off our classical series.

Ben Norris - Violin
Ben Norris was born in Perth and studied at the RSAMD (now RCS) and Royal College of Music in London. Ben has a varied orchestral, chamber music and solo career, as a member of the BBCSSO since 2015, director of London Concertante, leader of Glasgow New Music Expedition, 1st violin of the Brodick Quartet, and regularly guesting with orchestras and groups around the country including the Scottish Chamber Orchestra, Royal Northern Sinfonia, Dunedin Consort, and further afield Le Circle de l’Harmonie in Paris. Ben spends his spare time rock-climbing and hill walking, preferably in the Northwest Highlands of Scotland (when the weather allows!)

Katrina Lee - Violin
Katrina Lee is a Yorkshire violinist, who began studying from the age of eight at the Kirklees Music School with Ralph Barker. In 2010, Katrina received a scholarship to study at the Royal Conservatoire of Scotland graduating with first class honours in 2014 and masters in 2016 under the tutelage of Andrea Gajic receiving the highest mark for her final recital. During her time at the Conservatoire, she won multiple awards including the Ian D Watt award, Hilda Bailey Prize, Robert Highgate Scholarship, Governors’ Recital Prize for Strings and Chamber Music, Mabel Glover Prize for String Quartet as well as prizes outside; the Musicians company Goldman award in 2015, scholarship from the Stephen Bell charitable trust and an award at the Queen Sophie Charlotte international competition in Germany.

Katrina was appointed the Principal 2nd Violin position with Scottish Ballet in February 2017 and has enjoyed learning all the rich ballet repertoire including Swan Lake, Nutcracker and most recently Prokofiev’s enchanting ‘Cinderella’. As well as orchestral playing, Katrina loves chamber music and is in the Brodick String Quartet and the Escocia duo, a Violin and Classical Guitar duo. Her playing work has taken her to lots of countries including most recent the Lincoln Centre in New York. Other places include China, South America, Hong Kong, Canada, Iceland, Italy and Prague.

Katrina plays on a modern violin (2003) based on a Guaneri del Gesu by Andrew Fairfax and a bow (1955) by Louis Henri Gillet.

Alice Allen -  Cello
Alice Allen grew up in Banchory, Aberdeenshire and was formerly young artist in residence with the Scottish Ensemble. She has performed live on BBC Radio 3 and Radio Scotland and has recorded with many leading folk artists including former BBC young traditional musician of the year Robyn Stapleton and MG ALBA Scots Singer of the year Iona Fyfe. Alice's playing has taken her to the BBC Proms, the Wigmore Hall, Europe and India. Alice works with many of the country’s leading performing groups including the BBC Scottish Symphony Orchestra, Scottish Chamber Orchestra, Scottish Ensemble, Liverpool Philharmonic, London Concertante and the Brodick Quartet. Alice performs regularly with fiddler Alastair Savage and is the Enterprise Music Scotland Ensemble in Resience 2019-21 as one half of the duo GAIA.

Rhoslyn Lawton - Viola
Hailing from the small village of Llansoy in South Wales, Rhoslyn Lawton began her musical studies at the age of five and at the age of 16 took up a place at Chetham’s School of Music in Manchester. She then went on to study at the Royal Northern College of Music and the Royal Academy of Music where she graduated from the Master of Arts programme with Distinction.

As a soloist and a chamber musician, Rhoslyn has performed in many of the leading concert venues across the UK. In 2007 she performed the European premiere of Jose Lezcano’s Sonata for viola and guitar and in 2008 she gave her concerto debut performing Mozart’s Sinfonia Concertante. In 2013 she performed Elliot Carter’s Au Quai in the Duke’s Hall RAM as part of a celebration for the late composer. From 2012-2016 Rhoslyn was a member of the Alauda Quartet with whom she studied for her Masters in Chamber Music at the Hochschule fur Musik, Theater und Medien Hannover. The quartet was appointed Junior Fellows in Chamber Music at the Royal Academy of Music in 2013 and were selected as Park Lane Group artists in the 2015 series.  Since 2017 she has been a member of the Brodick Quartet giving recitals regularly across Scotland.