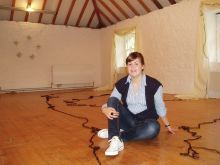 Lindsay won the Student Residency Prize in . Here is her reflective essay following the residency:

"I was very pleased to have been offered the residency in Cromarty so soon after graduating from Art School and welcomed the opportunity to take my previous work further. I had been working with the ideas of the role of craft today as a form of emotional survival for contemporary life and was interested in taking some of these ideas further and perhaps with new direction. I was also interested to connect the work to Cromarty and its community in some way, and to learn about crafts that are currently being undertaken there.

I began my residency by attempting to get to know the area and contact some of the local people who do various craft activities. This was harder than I had anticipated, however by the end of the second week I had managed to meet and learn about a number of different skills including rag work, how to make crails, cushions and other handy crafts. I had also learned of the close connection the community has to the sea and what a large part it plays in the lives of the local people and in Cromarty’s history.

I had managed to meet some of the people who work at the harbour and that are in the Cromarty boating club and who were kind enough to help me with my research into survival at sea and the skills associated with this. It was from these meetings that I became interested in the skill of tying knots.

This is a skill that at one time many people in Cromarty would have known. I then began to develop this idea further and researched various knots that are associated with the sea and how to tie them. I then discovered that the knot is also a known symbol of unity. It provides a means of connecting and joining one to another. This is similar to the way in which individuals within a community are connected and linked to each other, and to a place that they live.

I also wanted to connect this idea to the crafts I had seen in Cromarty and began making a series cushions embroidered with instructions on how to tie various knots and there purposes. I also made drapes for the four windows in the gallery space which were stitched with a continuous chain sinnet knot which continued from the drapes on to floor space of the gallery connecting all the individual drapes together representing the way in which all the individual members are connected to each other like links in a continuous chain.

Overall I was happy with the way the work turned out and I got quite a positive response from people at the opening. I am very grateful to have been given this opportunity and feel that I have learned many skills that will no doubt help me in the future.

I would like to thank the Cromarty Arts Trust for this opportunity and to all those involved in the residency. The residents of Cromarty for their time and interest in my work, and to those who allowed me to see their own craft works, and to my family and friends for their support and encouragement."