21 - 23 April 2023
Following a brilliant return to a live and residential event 6-8 May 2022, we are delighted to announce the dates above for next year's festival! 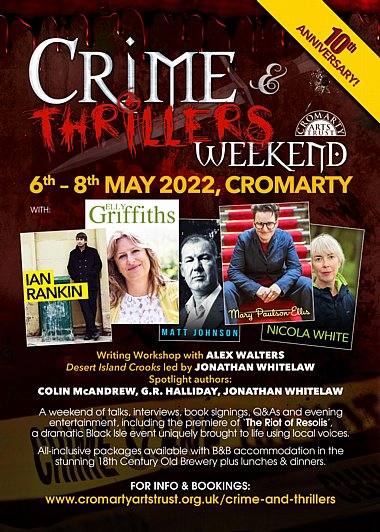 We won't be announcing authors or a programme until much nearer the time but you can guarantee there'll be a feast of great events to tempt you with, as well as residential packages with accommodation at the Old Brewery and wonderful, home-cooked meals.

Why not whet your appetite and check out what and who has been before by clicking on the archive years below?

For the first time, this year the Murder Mystery Dinner will be held at the splendid and atmospheric surroundings of Georgian mansion, Cromarty House (by kind permission of John & Lucy Nightingale). There will be optional fancy dress/period costume for the 1920s and 1960s (to tie in with the dramatic events that will unfold!).  There will be a prize for the best costume from each of these eras! We are delighted that Cromarty's award-winning Sutor Creek Cafe will be catering for the Dinner. The delicious menu below will be available both nights (please note - menu choices need to be selected on the form at the time of booking tickets). MENU Starter Gravadlax of salmon, baby herbs, mustard dressing  Or Asparagus velouté, crème fraîche, homemade bread    Main Braised ox cheek, fondant potato, roasted carrot, turnips, red wine jus Or Truffle roasted spring vegetables, broccoli arancini   Dessert Vanilla mousse, poached pineapple Or Rhubarb and ginger crumble, cream

Sara Sheridan: How I Ended Up Killing People With Poisoned Cake

Sara Sheridan is an Edinburgh-based novelist who writes cosy crime noir mysteries set in 1950s Brighton centred around Mirabelle Bevan, and historical novels based on the real-life stories of late Georgian and early Victorian explorers. She has also written for children – her picture book 'I’m Me' has appeared on CBeebies three times. Tipped in Company and GQ magazines, she was nominated for a Young Achiever Award. She received a Scottish Library Award for Truth or Dare, her first novel, and was shortlisted for the Saltire Book Prize. Sara co-wrote two short films, one of which was nominated for a SkyMoviesMax Award. An occasional journalist and blogger, Sara has reported from both Tallin and Sharjah for BBC Radio 4's From Our Own Correspondent and has appeared as an historical expert on ‘being a lady’ on BBC Radio 4’s Women’s Hour. Sara is a regular guest on BBC Radio Scotland, on BBC Radio 2’s Jeremy Vine Show as well as reviewing the newspapers on Radio 5 Live. She has appeared as a cultural commentator on BBC1, BBC2, CNN, UTV and Sky News. She occasionally blogs for the London Review of Books, the Scottish Book Trust and the Huffington Post. She has written articles for a variety of newspapers from the Guardian to the Daily Record as well as BBC History magazine. Sara admits to being a Twitter evangelist and a self-confessed swot (that’s a nerd if you’re from the US). She believes writers need writers and has sat on a variety of committees in writing organisations as well as taking part in a plethora of writing exhibitions. She occasionally mentors fledgling writers for the Scottish Book Trust and appears regularly as an after-dinner speaker at corporate events. Sara has been named one of the Saltire Society’s 365 most influential Scottish women, past and present. She is also patron of registered Edinburgh charity Its Good 2 Give, which provides support for critically ill children and their families. Sara’s talk will be entitled ‘How I ended up killing people with poisoned cake’ - intriguing to say the least!

Needing no introduction to locals, regulars of the festival or crime fiction readers, Ian’s latest novel Rather Be The Devil, was published last November and hit the top of the hardback fiction charts. The 22nd installment in the bestselling Inspector Rebus serious of crime novels, it sees the protagonist coming out of retirement for one more case. When Rebus was retired and Ian started writing about a new detective, Malcolm Fox, he had the idea of bringing him back to advise about cold case investigations and this format has lasted a few books. It leaves Ian with a dilemma about when Rebus should finally hang up his notebook as he’s already given the detective COPD (chronic obstructive pulmonary disease) from years of smoking, drinking and lack of exercise. Rebus is not getting any younger, either. Could Rather Be The Devil be the last Rebus novel? Whatever Ian decides, he still has plenty to do. Although he’s taking this year off from writing a novel, there are short stories in the pipeline and it is also the 30th anniversary of Rebus’s first appearance. 2016 saw him as visiting professor at the University of East Anglia’s creative writing course, another challenge in a different direction. Ian’s talk will be called ‘Better the Devil you know’ - a chance to hear about the development of his latest book, question him about the future of Rebus and chat generally about Rankin-related subjects!

Scottish crime-writer now living in Estonia and author of the Barney Thomson novels. Douglas was born in Scotland in 1964 at 2:38a.m. It rained. Some decades later he left to live in Belgium. Meeting his future wife, Kathryn, he took the opportunity to drop out of reality and join her on a Foreign & Commonwealth Office posting to Senegal. It was here that he developed the character of Barney Thomson while sitting in an air-conditioned apartment drinking gin & tonic at eight o'clock in the morning. Since the late 1990s, he has penned seven books in the Barney series, and several other crime novels written in the non-traditional style. I asked him how he characterised his style. “Although all my fiction is contemporary, all set in very modern, recognisable places and institutions, I’d still describe the writing as fantastical, frequently bordering on the preposterous. I’m not striving to recreate real life. I want to be absurd. I want elements of the supernatural and the ridiculous. I know it creates problems for some readers, because I’m setting stories in very real situations, but at the same time stretching the limits of credulity. The very nature of crime is, of course, innately depressing. Shit things happen to good people. I don’t want to go into that. I don’t want readers to be depressed, even if I am or my characters are. I want them to know they’re reading fantastical fiction. If you want carefully researched reality crime, best look elsewhere.” His first book, The Long Midnight of Barney Thomson, has been translated into several languages and in July 2015 was released in the UK as the major motion picture event, The Legend of Barney Thomson, starring Robert Carlyle, Emma Thompson and Ray Winstone. Other characters that Douglas has created are DS Thomas Hutton and DCI Robert Jericho. Douglas offers the following advice to writers: “It’s good to sit at a table doing jigsaws. Helps you think. Alternatively, go outside for a run or a bike ride. Don’t sit staring at a computer or notepad too long, while your head explodes and you drive yourself nuts through an inability to be suitably, effectively creative. Clear your head. Come back to it when you’re ready.” Douglas’ talk is entitled ‘The Accidental Barber Surgeon’. Another cryptic headline for a talk!

Saturday Night at the Movies - With The Authors

Our Saturday Night at the Movies is the perfect way to round off your Saturday, whether you've immersed yourself in the whole Crime & Thrillers Weekend or just fancy a local night out. You'll be treated to the Hitchcock classic, Dial M for Murder, introduced by Ian Rankin and with discussion from all our authors about their favourite crime and thriller films of all time. Bring your own refreshments and we'll treat you to a wee bag of popcorn on arrival! Tickets cost £10 (£8 concession; £5 under 16).  Pay on the door; reserve yours in advance at info@cromartyartstrust.org.uk or call 01381 600354. Here's a synopsis of the movie... Dial M for Murder has a romping plot, a gloriously slimy villain and – thanks to the fact that the action is mostly constrained to one room – some of the weirdest, tricksiest camera work of Hitchcock's career. The plot follows Tony Wendice's plan to have his wife, Margot, murdered so he can collect on her life insurance policy. A former tennis pro whose tour earnings are dwindling, he's also discovered that Margot is having an affair with a famous crime writer called Mark Halliday, who is visiting the couple from America. Wendice has blackmailed an old schoolmate to do the deed and plans to use a boys' night out with Halliday as his alibi. But when the murder's bungled and Margot kills the killer, he's left having to improvise. Dial M for Murder - cert PG.  105 mins.  1954.  Starring: Grace Kelly, Ray Milland, Robert Cummings

Rosemarkie Man: Murder in the Caves

'Rosemarkie Man: Murder in the Caves' with Simon Gunn & Mary Peteranna (Rosemarkie Caves Project) A chance to learn about the incredible, important and gruesome find by local archeologists just miles along the coast from Cromarty.

Tom Wood: Ruxton to The World’s End – 50 Years of Murder

Retired Deputy Chief Constable and author of 'The World's End Murders: A 30-year Quest for Justice.' The horrific killing of two young Edinburgh women in October 1977 sparked a nationwide manhunt that turned into one of Britain's longest and most famous murder investigations. In The World's End Murders, Tom Wood and his co-author David Johnston tell the story of two innocent young women, Helen Scott and Christine Eadie and of the extraordinary commitment of the police enquiry over three decades that eventually led to the discovery of links to their deaths with Angus Sinclair, one of Scotland's most notorious murderers and sex offenders. But this is not a gruesome tale of murder. It is a story of heroes - of the families of Helen and Christine who, with quiet dignity, have carried an unimaginable burden down the years, and of the police officers, the support staff and the scientists who persisted in their investigations and never gave up. The case of Buck Ruxton (1935) was one of the most notorious pre- war. It's been written about extensively but in 2000 Tom was given a pile of old case papers which turned out to be original ‘Ruxton' case papers. They put a quite different slant on the case, and he's writing a new account of one of the most important cases in Scottish investigative history. Tom has acquired some original crime scene pictures which have never been seen in public before. Tom Wood was Deputy Chief Constable and Director of Operations of Lothian and Borders Police and officer in overall command of the linked murder investigation into the deaths. He has a distinguished record of study of police operations and management and was awarded The Queen’s Police Medal in 1995. His talk is entitled 'Ruxton to The World's End - 50 Years of Murder’.

Panel Discussion - with all authors

1Check out some of these video's from previous years below: